HAMMIN' IT UP ON TEXAS HIGHWAYS

For better or worse, Texas and its citizens get their fair share of media attention. If it’s not our healthy economy, it’s our brash politicians. You might read about one of our sports teams or perhaps the thriving music industry here. There’s no shortage of pride in our fair state, and our most recent claim to national fame is the opening of a new tollway that offers the fastest speed limit in the US - 85 mph. The Capital StreetScapes owners are proud Texans born and raised, and we suppose that having the fastest highway is pretty cool; however, this latest distinction has not come without cost. That’s right… we’re talking about the threat from our burgeoning wild hog population.

In a nutshell, here’s the problem: State Highway 130 cuts across what’s largely farmland between Georgetown and Seguin (a span running north and south of Austin) in an area where the feral or wild hog is wildly increasing in number as its population advances north from the Rio Grande Valley. These 150-200 pound cuddly creatures present numerous problems to civilized man, including crossing the aforementioned highway in packs (for no apparent reason) and mostly at night. In the first evening alone following the opening of SH 130, there were four reported collisions, fortunately with no serious injuries but with damaged or totaled vehicles.

So what’s to be done? Think about it: there are standardized crossing signs for many of our favorite four-legged creatures. Don’t believe us? Take a look: 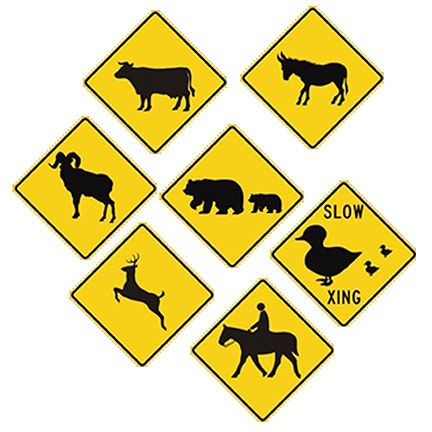 After studying this distinguished lineup, you’ll probably figure out where we’re headed - there’s no signage for swine. Now if you’ve read anything about this pork overrun, you know that the issue’s not restricted to the Lone Star State. Florida also has a serious problem, and it’s reported that these guys now roam freely in 40 of the 50 states in the USA. Clearly, this pork has us all over a barrel.

Seizing the initiative, Capital StreetScapes, as a leader in traffic, street and wayfinding signage, believes that the first step is to create standardized Pig Crossing signage. And so now that we're unveiling the prototype, let's talk bacon. 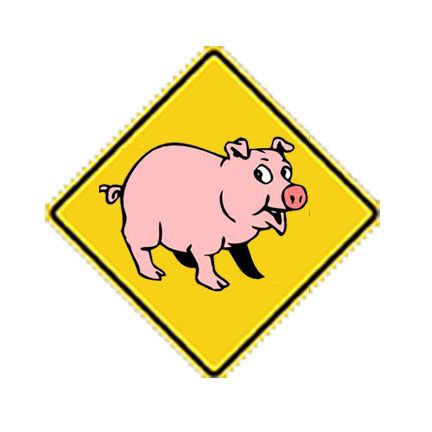 Although perhaps not in final form, we humbly believe it’s a good place to start. Now if we can just get the critters to actually use these Pig Crossings…