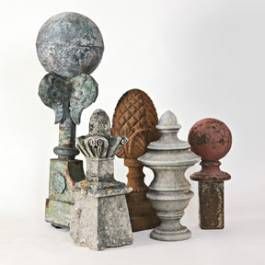 THE FINAL WORD ON FINIALS

We sell a lot of finials at Capital StreetScapes, but what’s their story? Often misunderstood and mispronounced, the finial has a long and somewhat disputed history.

A finial is an architectural or decorative feature that adds an artistic element to an otherwise functional piece or object. Finials have taken many forms and feature a wide range of different designs, figures and sculptures. They have been used all over the world from medieval times, most notably in China where they appeared in pagoda style architecture beginning in the 8th century. The concept is thought to be representative of Buddhist deities situated high above humanity . Other historians believe finials were first attached to the tops of buildings and castles to act as a deterrent to witches on broomsticks trying to land on the roof

Some say finials have their roots in ancient Greece and crop up intermittently throughout that country’s history. Common finial motifs there include obelisks, flames, urns or acorns, although many different shapes and designs were used. The Romans were also known to have decorated their roofs with ornamental features because fragments have turned up in archaeological digs. In old England, finials were designated as ornate garden features that were placed atop fence posts, balustrades and walls to signify sophistication and beauty.

They can be found on the ends of curtain rods, fastened to the tops of lampshades, and on chairs and furniture. Pottery such as teapots and teacups often has finials as part of the spout or handle, and these types of collectibles can sometimes be identified by the style and type of finials present. Finials were often made of wood and could be seen on tall furnishings such as bedposts, clock cases, highboys, secretaries and bookcases.

The truth is, finials serve little practical purpose other than to add a decorative or stylistic element, but we think that's a pretty significant role to play. Although misunderstood and somewhat shrouded in mystery, finials will always have a special place in our heart.

Look for our finials featured on our their own personal page, in our Custom Street Sign Examples, and even on our growing Testimonials page. They're a critical element for the best-looking decorative sign posts and custom street sign posts you'll find.